IN PROGRESS — NOT FOR PUBLICATION

On returning to his home in Trinity Road, the author Thomas Hardy falls seriously ill. He won't be able to walk outdoors again for seven months — until May 1881, when he sets off alone and ecstatic across Wandsworth Common. He is just 40 years of age. 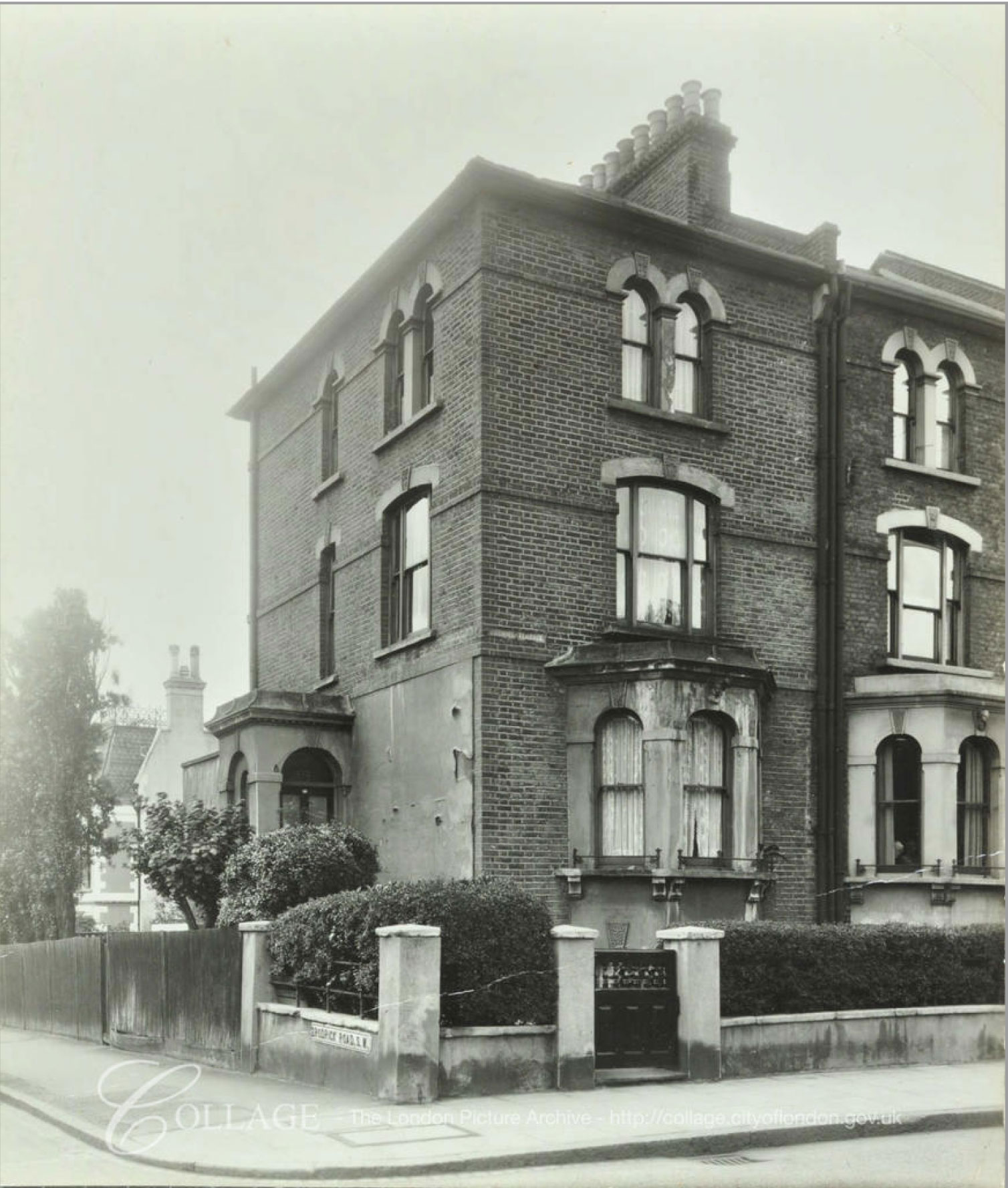 "The Larches", 1 Arundel Terrace (now 172 Trinity Road), with its entrance doorway in Brodrick Road — photographed in (a rather dreary) 1938.

This was Thomas and Emma Hardy's home for more than three years, 1878-1881. [Source: Collage (recently renamed the London Picture Archive).] 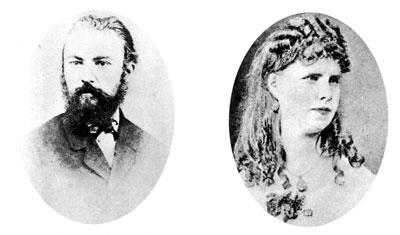 True, these photographs were taken ten years before the events I'm describing. But in the absence of contemporary images, they remind us that the couple were young when they were living here — certainly Hardy appears quite unlike the older (and established) man of letters we normally see. [Add Source.]

Thomas and Emma Hardy had moved to Arundel Terrace in March 1878. It was a newish house, on four floors, at almost the highest point of Trinity Road - hence it had huge views across to London (and St James's Industrial School) in the north-east and Wimbledon (and the Surrey Pauper Lunatic Asylum) in the south-west. But it was exposed to the elements on three sides and hence witheringly cold and draughty.

The purple circle shows the position of the Hardys' home — not built yet. Notice how open the area is, with a few large public institutions and substantial houses, but otherwise the ope Common, nursery gardens, fields and hedgerows. Wandsworth Common railway station, which gave quick access to central London (and indeed to Dorset, via nearby Clapham Junction) has recently opened. All these features influenced the Hardy's choice. But the area was urbanising rapidly. 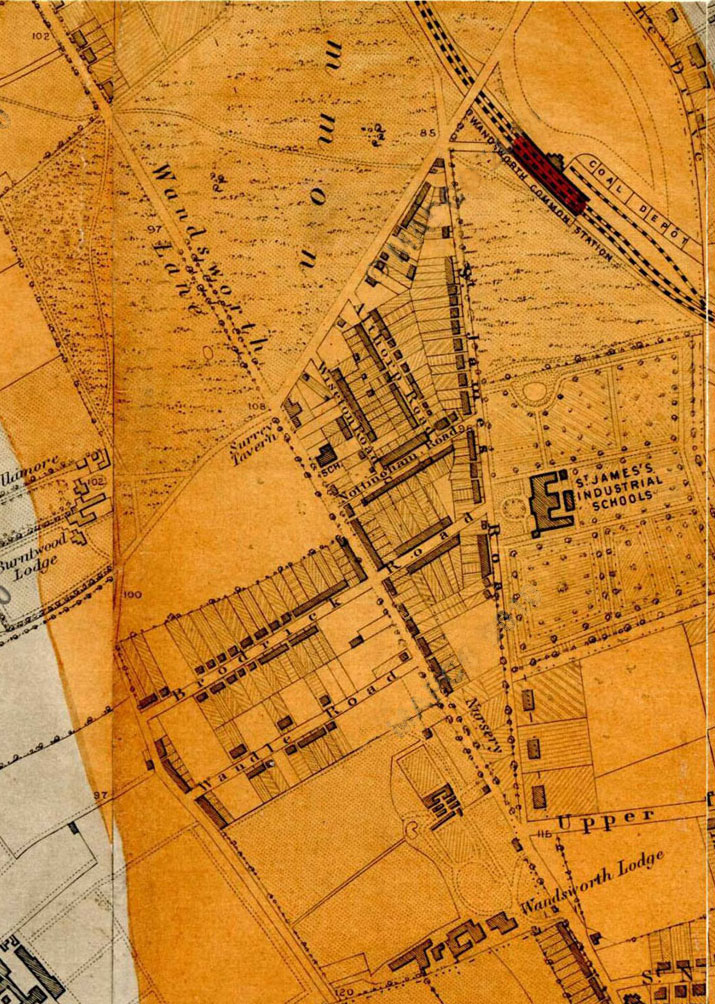 Behold the Hardys' house. (The orange colour means the ground beneath is gravel - and hence assumed to be free-draining. This is so highly desirable in damp, claggy London that contemporary estate agents always used it as a selling-point.) Notice how speedily the area is being transformed — but still quite a way to go.

The following day, Sunday 24th October, Hardy's condition had worsened and a surgeon who lived opposite was sent for. The surgeon returned on successive days and pronounced that Hardy was bleeding internally. An operation was required, but it would be very risky.

Mrs Hardy called for advice on their friend the publisher Alexander Macmillan (who lived at Knapdale, an impressive house near Tooting Bec Common). The Macmillans' doctor agreed with the earlier diagnosis. 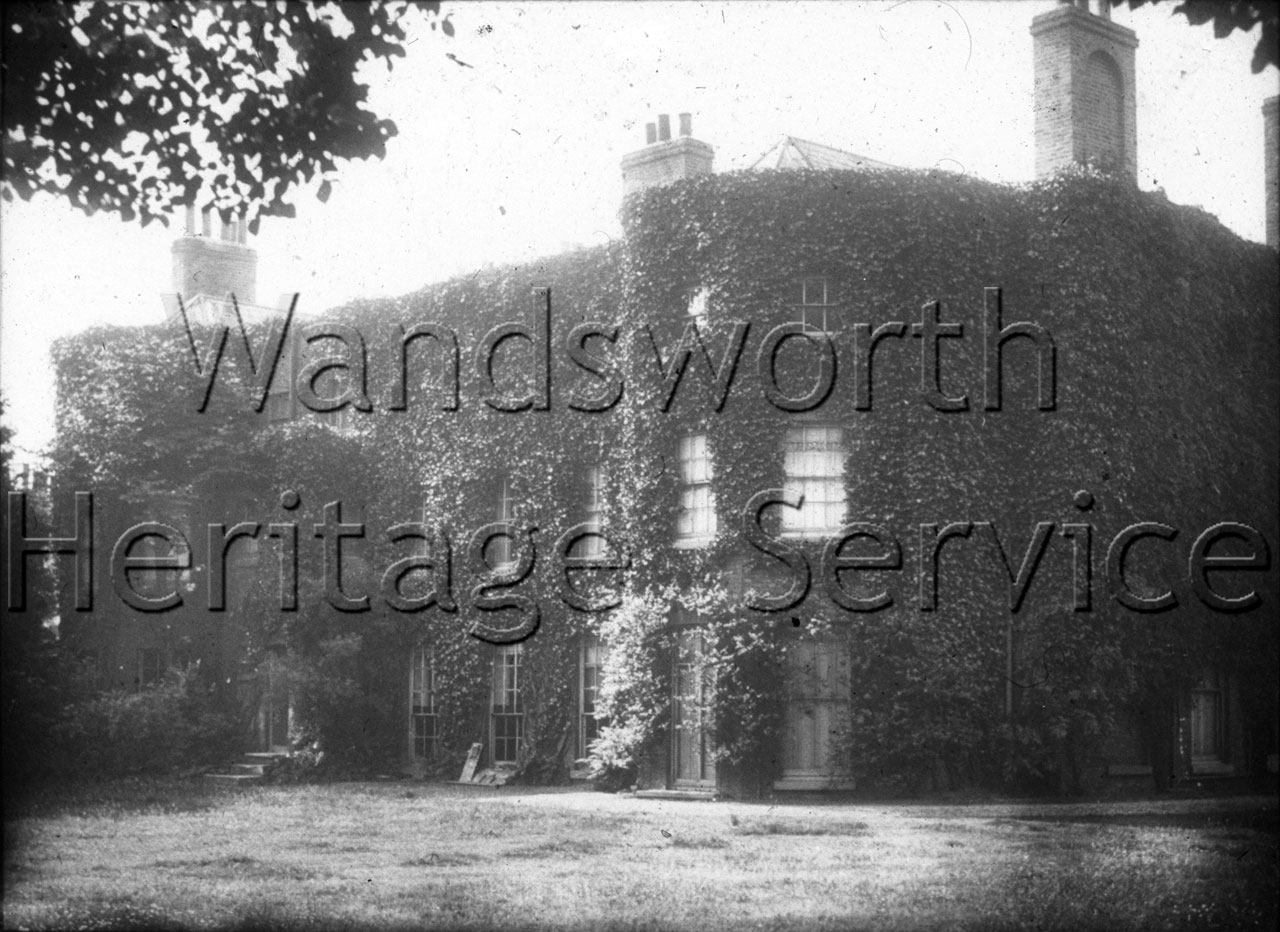 Guests at great garden parties held there included "Darwin's Bulldog", the evolutionary biologist and educator Thomas Henry Huxley. The Hardys were frequent visitors. There is even a suggestion that they moved to Wandsworth to be near the Macmillans — in short, to move in the intellectual circles that might help Hardy's floundering career.

It is not certain what caused Hardy's condition but probably cystitis, causing an inflammation of the bladder, — in the absence of antibiotics, a very painful and debilitating disease. Hardy blamed it on excessive swimming on the Normandy coast in the previous July. (Some biographers have also seen a psychological component. Hardy had been working hard for some years but doubted that his finances and reputation would ever improve. He also writes that it was here that that the breakdown in his relations with Emma began.)

An operation seemed inevitable, but the Macmillans' doctor asked Hardy how long he could stay in bed, not getting up on any account? For many months? If so, there was at least a chance that he could recover without surgery.

Hardy was ordered to lie on an inclined plane with his head below the level of his feet. His wife Emma became his nurse and amanuensis, at which she excelled. In this uncomfortable position, he worked on a number of books, substantial short stories, poems, and correspondence throughout the hard winter that followed.

John Buckmaster, who had once been a carpenter (so he knew "whereof he spoke"), often rails against the poor construction of new houses around the Common. Given its exposed location the Hardy's house was particularly grim, with snow blowing through window cracks and doors.

In the months to come, I'll probably add some stories about the Hardys' experiences with illness, cold, snow, and of course Wandsworth Common. 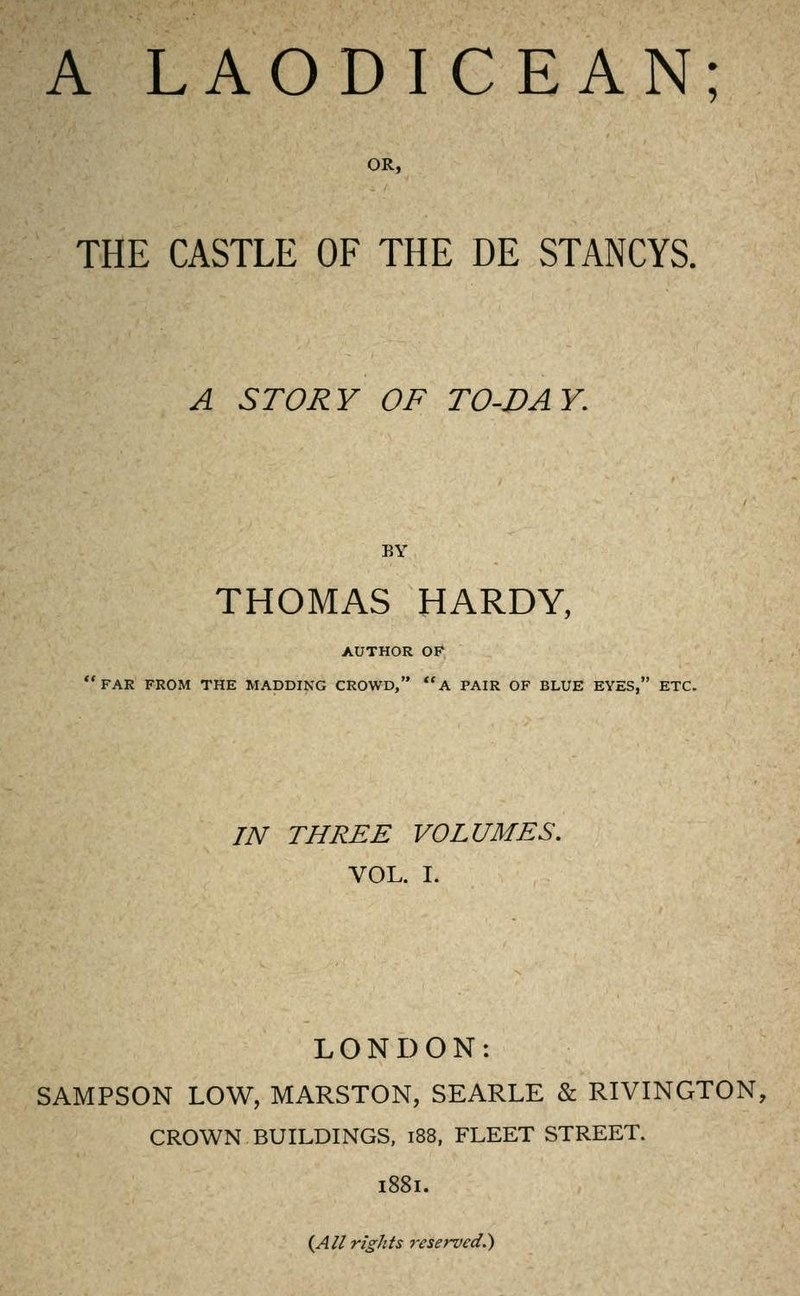 The main work Hardy wrote at this most difficult time was A Laodicean; or, The Castle of the De Stancys. A Story of To-Day — not, it has to be admitted, one his more successful books, financially or artistically.

The following spring, having recovered some of his health, his first walk was on Wandsworth Common. Hardy records his exhilaration. But of that another time.


Send me an email if you want to comment on anything you've seen or read on the site, or would like to know more about something, or just want to be kept in touch.