LIGHTNING STRIKES close to the Windmill killed a young courting couple, and a man and his 3-year-old daughter. Near Bolingbroke Grove, on the other side of the Common, three children died: a brother and sister aged 5 and 4, and another boy aged 3.

"A GREAT BLACK CLOUD hung like a pall over Wandsworth Common, London, lightning zigzagged in the heavens, thunder peals were deafening, and the rain came down in a torrential spate. Under a tree were group of five children, happy in spite of the war of the elements. They were playing "Ring of the Roses," and their childish voices blended merrily in rag-time songs..." 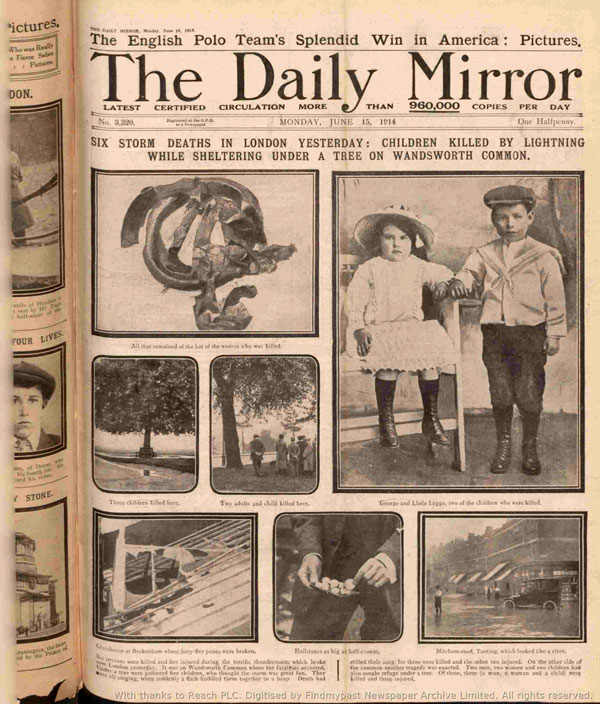 (Click on image to read the rest of the article)

This appalling event was reported throughout the world, and so unusual that it was even discussed in scientific journals. All the victims had been sheltering beneath trees, a fact which was highlighted in the coverage [more...].

"In railway carriage a too statuesque girl; but her features were absolutely perfect. She sat quite still and her smiles did not extend further than a fingernail's breadth from the edge of her mouth. The repose of her face was such that when the train shook her it seemed painful. Her mouth was very small, and her face not unlike that of a nymph. In the train coming home there was a contrasting girl of sly humour — the pupil of her eye being mostly half under the eyelid.

He died on 17 May 1910 in Rushmere Cottage, Wandsworth Common, London at age 86, and was buried in the Friends' Burial Ground, Wandsworth.


Back to the Chronicles home page


Send me an email if you enjoyed this post, or want to comment on something you've seen or read on the site, or would like to know more — or just want to be kept in touch.