Dear Reader, I was there, aged four, outside The County Arms pub on Trinity Road, waving my little paper Union Flag-on-a-stick. 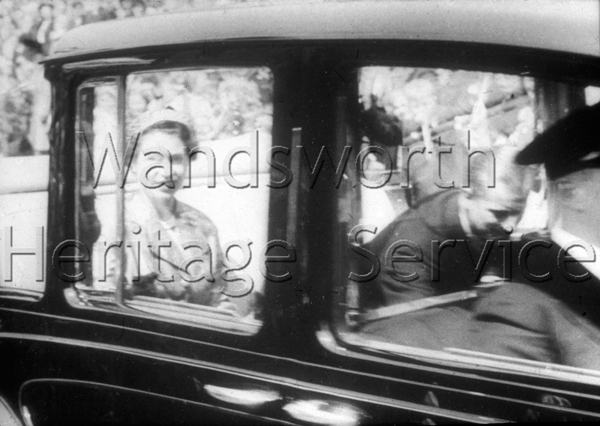 The Coronation of Elizabeth II took place on 2 June 1953. She followed it up by driving all over the country to see and be seen. 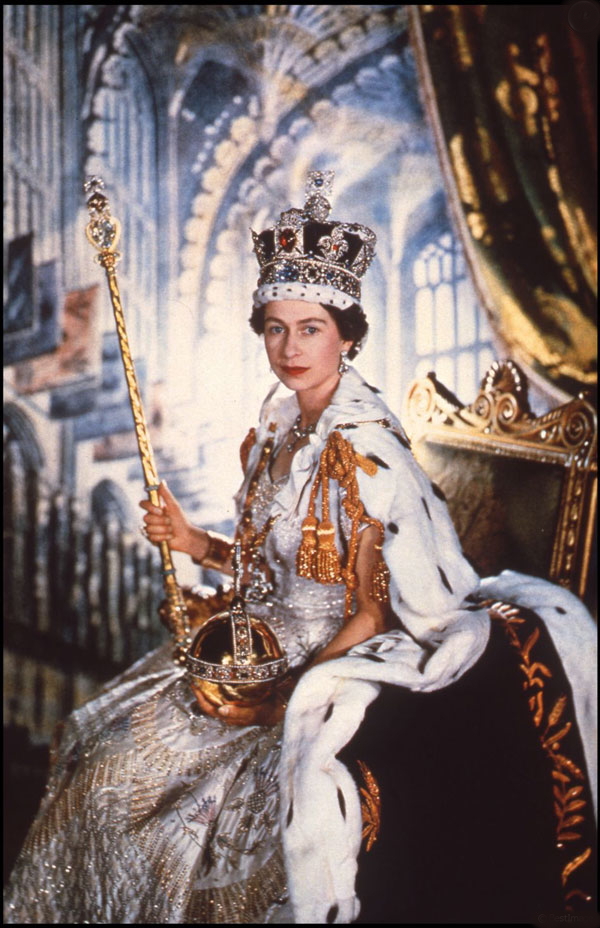 One of Cecil Beaton's wonderful photographs of the Queen on her Coronation Day, 2 June 1953.

Our day was Tuesday, 9th June. 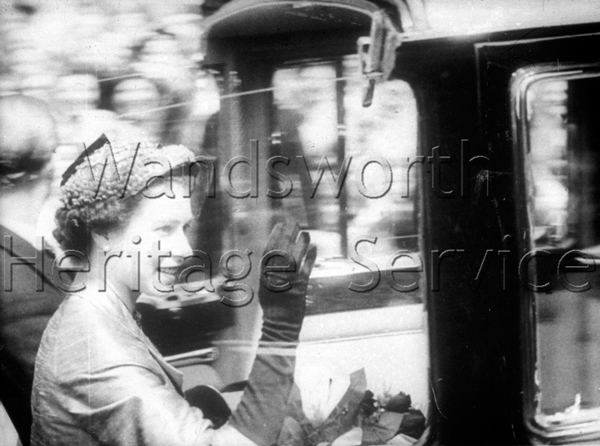 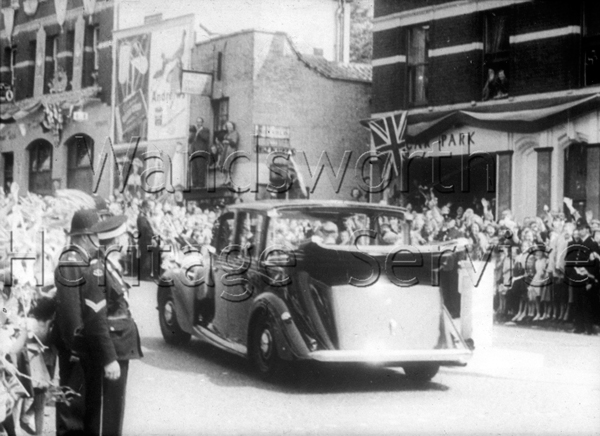 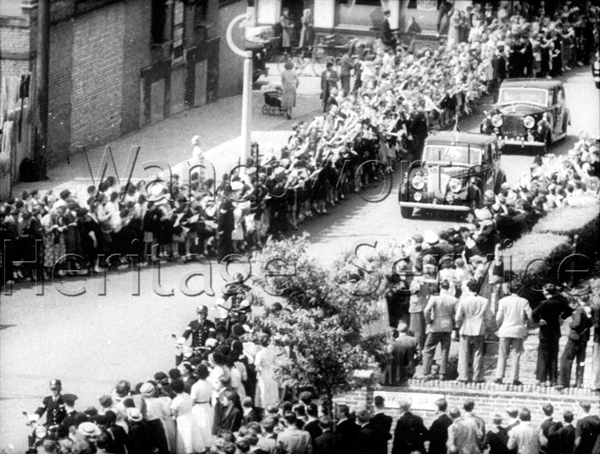 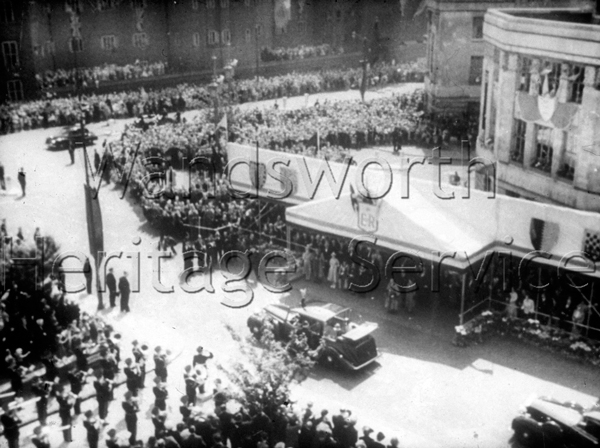 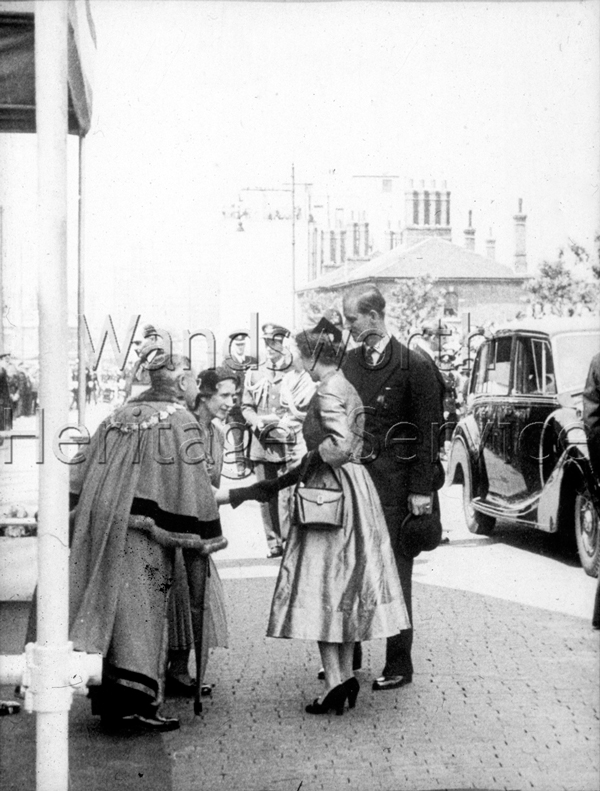 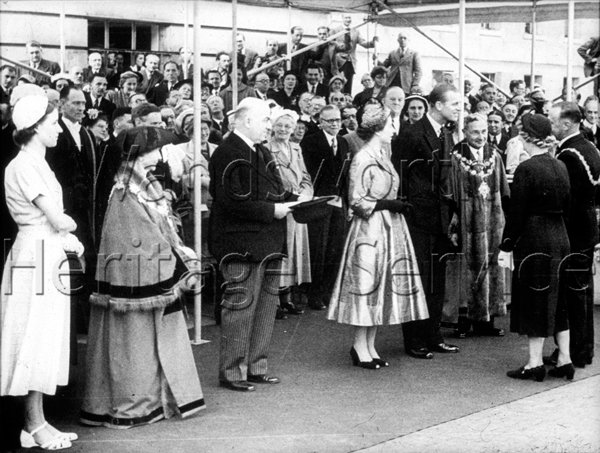 The Queen and Prince Philip visit Wandsworth Town Hall, where they meet the Mayors and Mayoresses of Battersea, Camberwell and Wandsworth.

Now here are some very strange things. The photographs above are of course in black and white. But my memory is in GORGEOUS technicolor, all bright blue and yellow and pink. (The Dundee Courier remarks that the queen wore "a vivid blue dress and small matching hat with a small black velvet bow at the back".)

And the car in my mind's eye is not the stiffly upright Rolls Royce (or is it a Bentley?) but a huge Yankie convertible, perhaps a Cadillac. At least the roof was down, to increase mutual visibility.

But also, looking at the planned route, when I saw her she would have been coming southward, left to right, along Trinity Road — from Wandsworth Town Hall in the direction of Tooting Bec and Streatham. Yet I distinctly recall her travelling northward, from right to left. 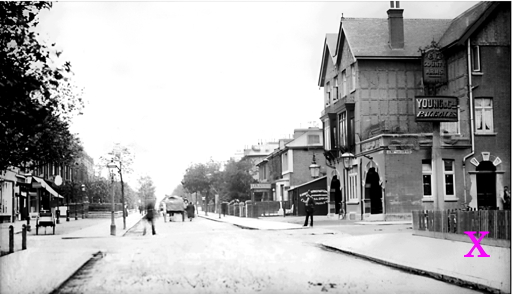 The County Arms c.1910. Everything looked much the same here until the late 1960s, when Trinity was widened from here northward and a dual-carriageway and underpass constructed down to Wandsworth Bridge.

By the way, the day didn't have quite such a profound effect on my friend Hugh Betterton:

June 1953 — Was outside my house at 26 Westside as the cavalcade swept by and I waved my plastic union flag! Remember thinking at the time that it wasn't that good, but duty called! Think we had a day off school? Other than that whole thing passed me by.

I asked him which direction he remembered the car was travelling.

"Cars came from East Hill right turn onto Trinity Road past West Side then south on Trinity Road — as far as I recall."

And this, from Peter Farrow:

I wish you wouldn't make these things so interesting. I have enough to do as it is without having to spend ages reading fascinating stuff, which, regrettably, once read will join the increasingly cluttered store of things I only half remember...

But I also write prompted by the Friends of Wandsworth Common flyer — as I too was there, I take your word for it being 9 June, taken by my mother to stand on that bit of Trinity Road north of Windmill Road. I don't remember much, apart from witnessing the disappointment of the women who had been on the Prince Philip side of the road, they had all wanted to see the Queen.

The royal visit to Wandsworth was quite an event, reported throughout the nation:

"From all over Wandsworth. the largest of the 28 Metropolitan boroughs, thousands had flocked to every available square inch around the municipal buildings to cheer the Queen.

Women fainted in the hot afternoon sunshine and were carried through the crowds be members of the St. John Ambulance Brigade" (Liverpool Echo).

Here are some nice touches, including a superb nudge-nudge comment about Prince Philip:

"As the car passed Battersea Park Festival Gardens, the crowd was amused to see the Duke of Edinburgh turn in surprise at the sight of orange girls in Nell Gwynn costume. As he looked back the eight girls made a deep curtsey." (Bradford Observer)

Passing Tooting Bec Hospital, "there were special smiles and waves from the Queen and the Duke for 400 patients gathered on a tree-lined verge, some of whom were paralysed" (Yorkshire Evening Post).

"In East Hill, Wandsworth, the Queen noticed a small boy and girl holding posies, stopped the car and beckoned them. Church bells pealed their welcome..."(Bradford Observer). 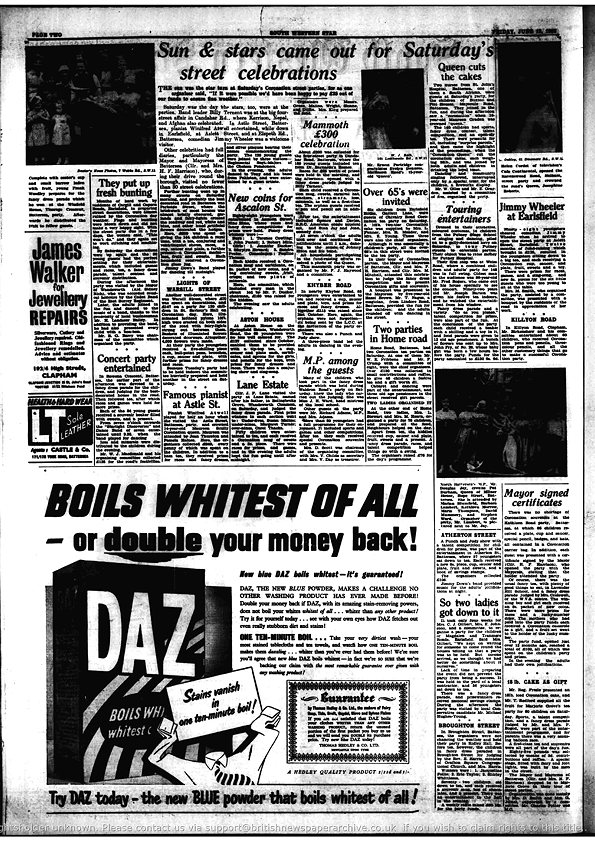 See also the accounts of local events on the previous Saturday (6 June), as reported in the South Western Star [Source: Link.] 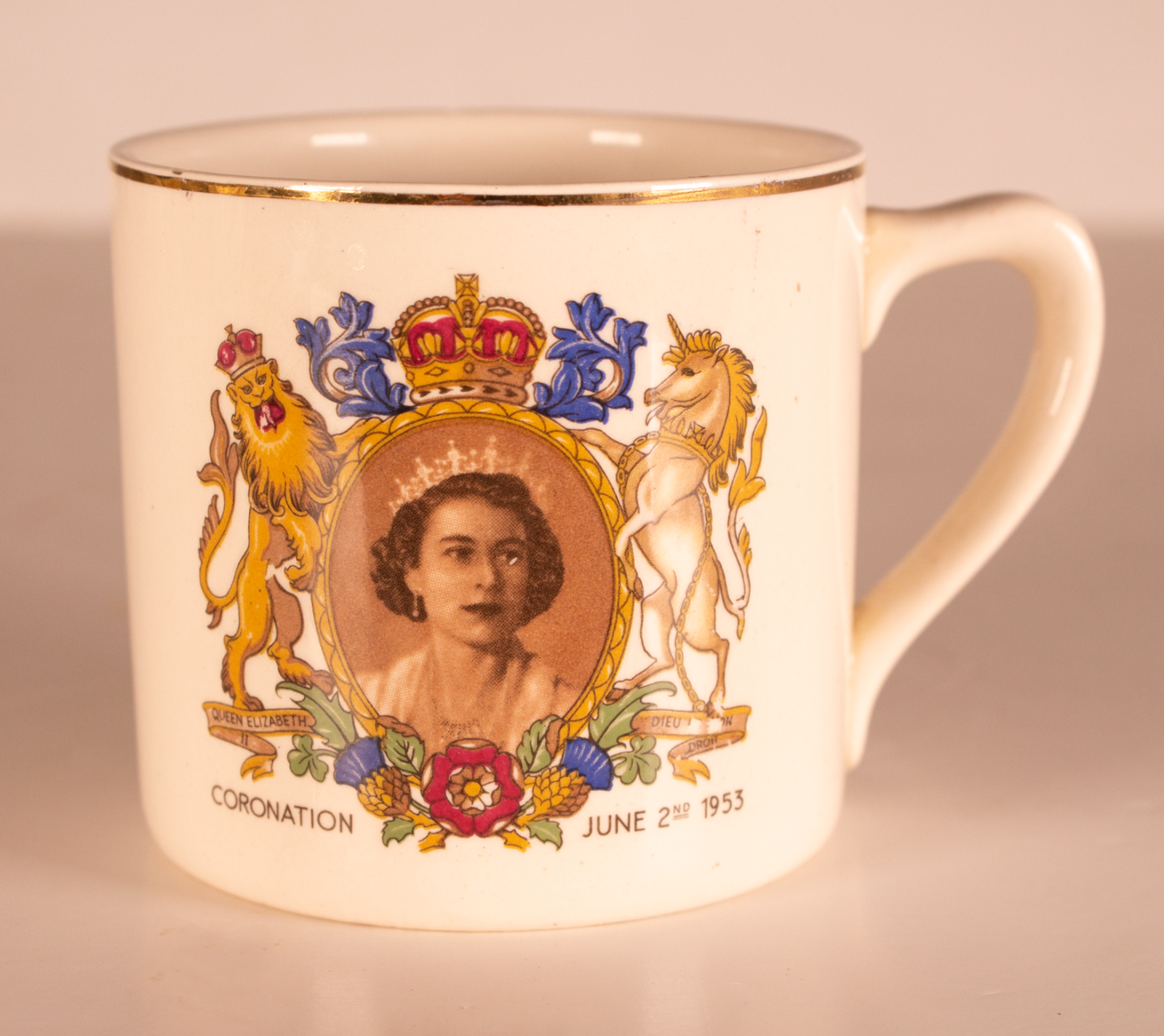 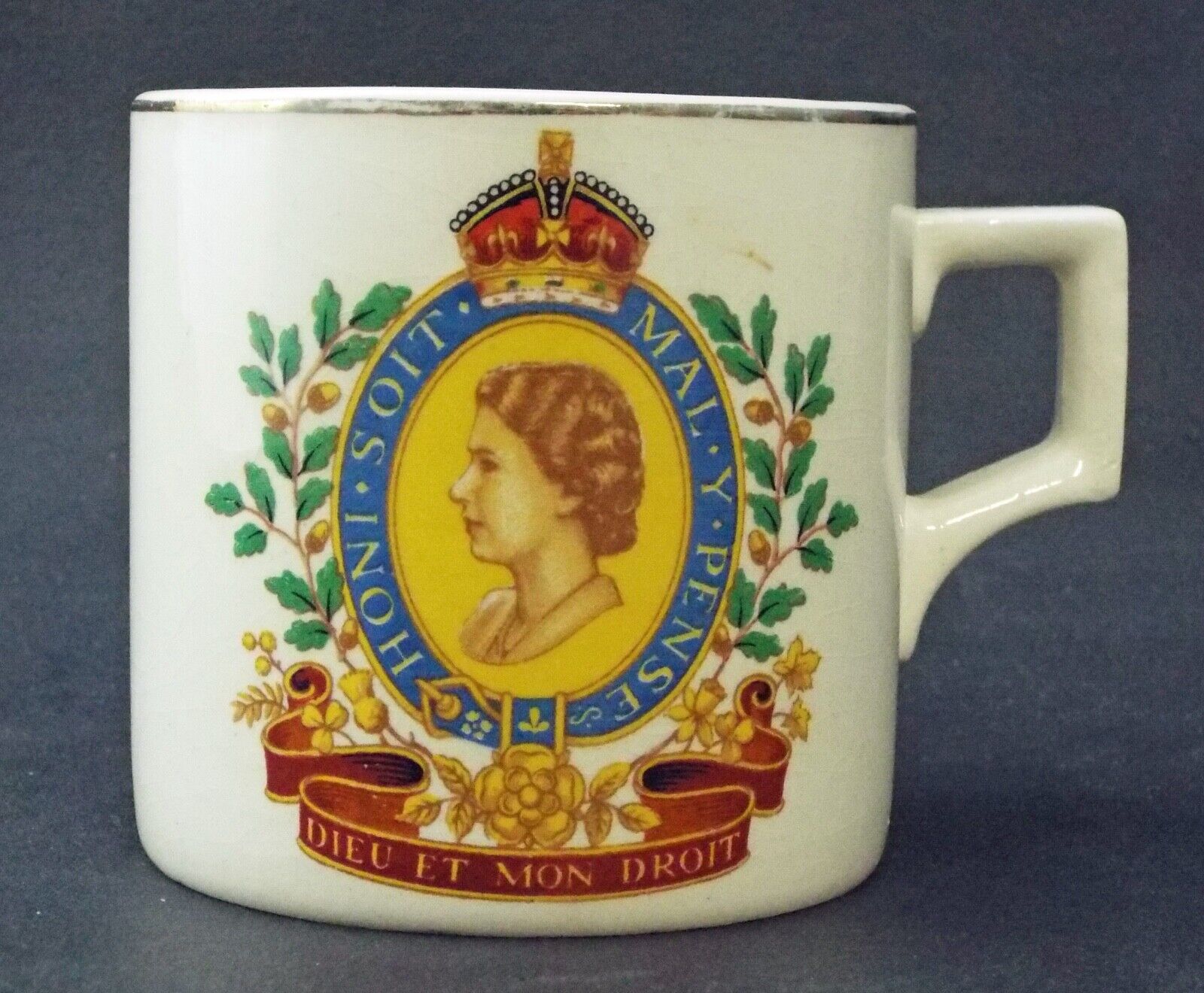 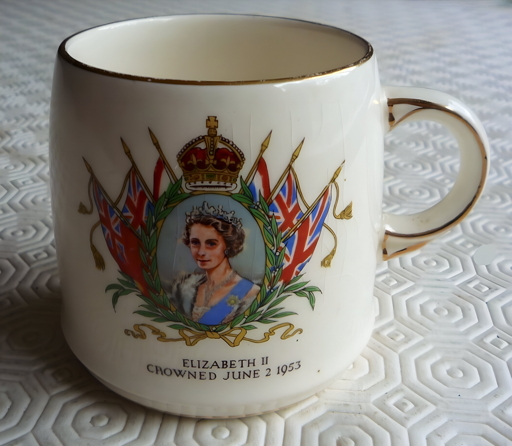 Coronation Mugs — some of the many designs. Was there any quality/likeness control? I assume not. Some towns produced their own. Was there an official Wandsworth version? Does anyone still have the mug they were given?

One of Cecil Beaton's wonderful photographs of the Queen on her Coronation Day, 2 June 1953.

Sharing a common sponsor/client in Queen Victoria, it is not surprising that major local instituions of the 1850s were closely related architecturally to Balmoral Castle. 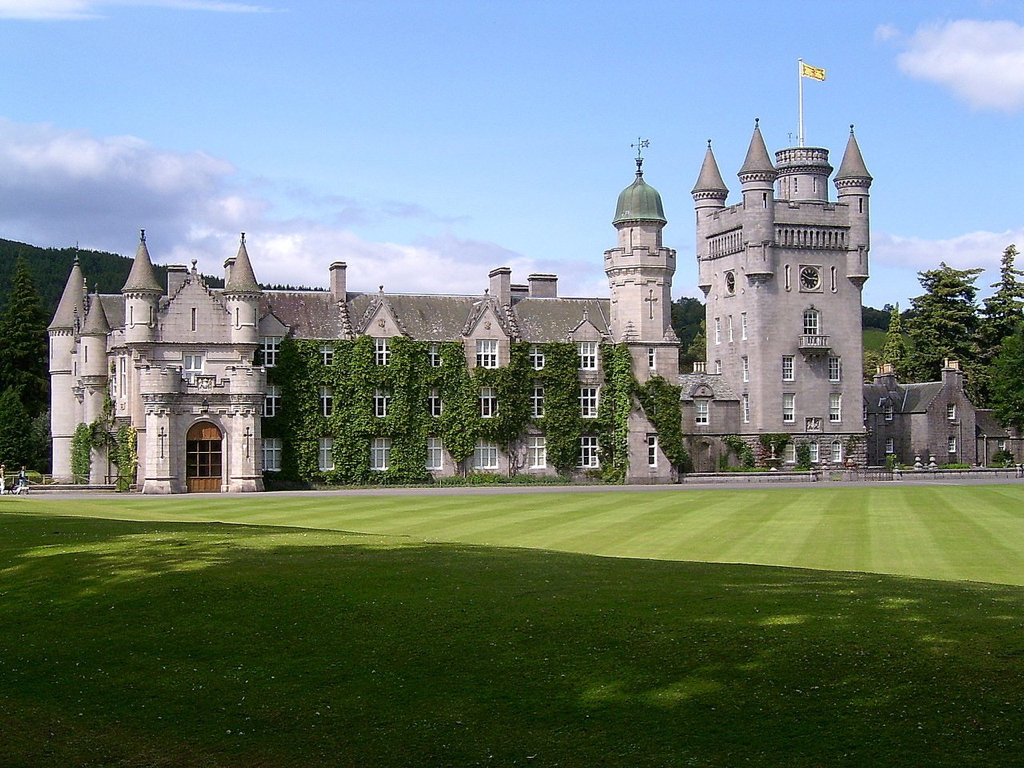 Balmoral Castle (completed 1856), built for Queen Victoria and Prince Albert in the "Scottish Baronial Style". In the 1850s, this was an almost obligatory look for buildings related to royalty (and not just in Scotland). 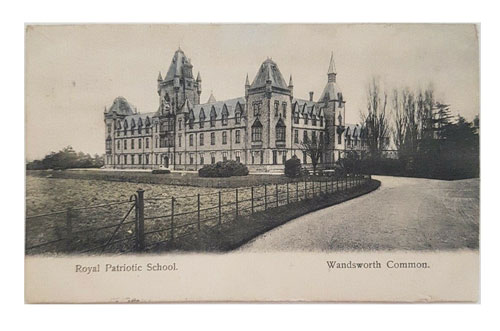 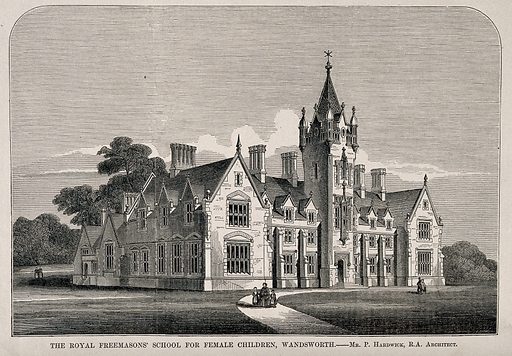 The Royal Patriotic Asylum for Girls (completed 1859) and the nearby Royal Freemasons' School for Girls (1853, demolished 1934).

Incidentally, the Royal Patriotic Asylum for Boys (now Emanuel School) was not completed until 1872, which may account for its very different style.

Why the Queen was not called Elizabeth Battersea *

There's a curious relationship between Windsor and Battersea — they appear to have been swapped in the 11th century. William the Conqueror coveted Windsor Forest, probably because it offered better hunting (and a terrific site for a new castle). But it was then under the control of Westminster Abbey. I'm not sure whether the Abbott was entirely happy with the transaction, but our area was certainly closer to Westminster.

And that's how Battersea came under the control of Westminster Abbey, and Windsor became Crown land.

So had this swap not taken place, it's possible that the Royal Family may now be styled the "House of Battersea".

The manor of Battersea, which before the Conquest belonged to earl Harold, was given by the Conqueror to Westminster Abbey, in exchange for Windsor. The record of Doomsday mentions some dismemberments of the manor, by the bishop of Baieux and earl Morton. These lands probably formed the estate which afterwards came to the Stanleys. There is a hide of land likewise mentioned, which belonged to the Abbey of Chertsey, of which a singular circumstance is recorded; that, on account of some quarrel, the provost of the village detached it from the manor of Battersea, and threw it into that of Chertsey.

The manor was valued in the Confessor's time at £80. It afterwards sunk in value to £30 and at the time of the Survey was estimated at £75. In the taxation of 1291, the possessions of the Abbey of Westminster, in Battersea, were rated at £15. Thomas Astle, Esq. has an original deed of archbishop Theobald, confirming a charter of king Stephen, by which he exempts the greater part of this manor from all taxes and secular payments. Dart mentions several charters relating to Battersea; viz. William the Conqueror's original grant; a charter of privileges; and a grant to the Abbot of Westminster, of liberty to hunt in his manor; a charter of confirmation by Henry the First; and another of king Stephen; besides that of privileges before-mentioned...

* I would like to thank Stephen Midlane for making this observation.


Back to the Chronicles home page


Send me an email if you enjoyed this post, or want to comment on something you've seen or read on the site, or would like to know more — or just want to be kept in touch.